tl;dr: In which I attempt to montage jpeg which comprises areas of differing internal jpeg quality, for fun and, er… artistic geeky interest.
You see, once upon a time, I was thinking about lossless jpeg editing. The sort that jpegtran can do.

Specifically, jpegtran can (with some understandable limits) rotate/flip and mirror losslessly, and also crop – for values of “lossless” that only apply to the cropped image data.

I soon got to wondering if the reverse could also be true. If jpeg image data can be cropped losslessly; then it must not rely on surrounding data and so surely paste is equally possible.

I researched some and found… http://www.imagemagick.org/Usage/formats/#jpg_lossless. If you scroll down to the ‘Mixed JPEG Quality’ section it’s suggested:

Turns out that it can’t. Not the version currently in Debian anyway.

…But an experimental version can. See the version that the chaps have here: http://jpegclub.org/jpegtran/ 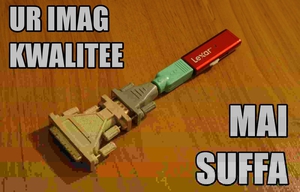 The information on that page indicates to me that the ‘drop’ option has been experimental since 2000 at least… and I wonder why it’s not mainstream then. But, let’s take a look anyway. There are helpful binaries and a sample script provided, but I had something a bit more fun in mind.

One download later, and some fiddling around… and here is this! IMAG KWALITEE for all!

The resulting image is 153k in size. In this example, a normal save of the source (captioned) image at a quality of 72 results in an image of equivalent size.

In creating this, I found a few caveats… 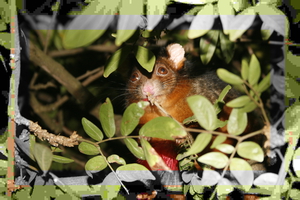 This tree is terrible! It has a monotone border bits AND bad compression

This page is derived from my wiki notes on the subject, which include additional information/updates for the inquisitive.

mix one mad rush of idea through a brain premixed with random knowledge and strange imagination. Please avoiding zombies whilst brain is exposed. Baste with motivation and bake well in the oven of the wiki. Serve to blog.